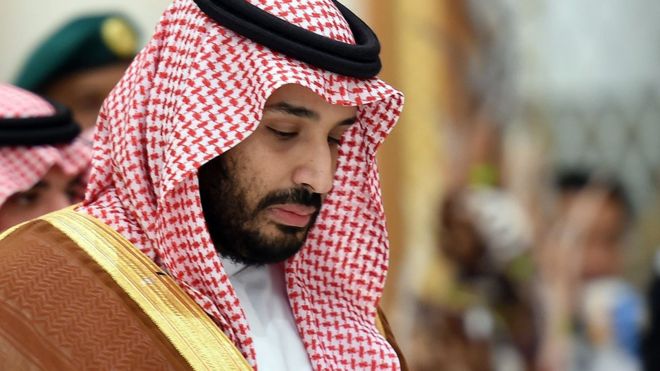 Saudi Arabia has said 34 mainly Muslim nations have joined a new military alliance to fight terrorism.
A joint operations centre is to be established in the Saudi capital, Riyadh, state media reported.


Countries from Asia, Africa and the Arab world are involved in the alliance but Saudi Arabia's main regional rival Iran is not.
It comes amid international pressure for Gulf Arab states to do more in the fight against so-called Islamic State.
Saudi Defence Minister Mohammed bin Salman said the new alliance would co-ordinate efforts against extremists in Iraq, Syria, Libya, Egypt and Afghanistan.
Neither Iraq nor Syria, whose governments are close to Shia-ruled Iran, are in the coalition, nor is Afghanistan.

Two things stand out immediately about this new Saudi-based Islamic Coalition.
The Shia-majority nations of Iran and Iraq are noticeably absent, as is their ally Syria.
It is far from clear how, in practice, the coalition would conduct counter-terrorism operations in IS-plagued Iraq and Syria without the agreement of those governments.
Secondly, there is the question of the exact definition of terrorism. The Saudi authorities' interpretation of it extends far beyond the violent actions of armed insurgents.
Recent legislation has branded peaceful opposition activists and reformers, whether online or in the street, as suspected "terrorists" and a security risk to the state.
Amnesty International said it had concerns that this new coalition could be used to further restrict human rights.
Speaking at a news conference in Riyadh, Prince Mohammed said the counter-terrorism force was borne out of "the Islamic world's vigilance in fighting this disease [terrorism] which has damaged the Islamic world.
"Currently, every Muslim country is fighting terrorism individually... so co-ordinating efforts is very important."
The coalition would not just focus on fighting IS, he added. Few other details have been given.
The SPA state news agency said 10 other "Islamic countries" had expressed support, including Indonesia.
Prince Mohammed said: "These countries have procedures to go through before joining the coalition, but out of keenness to achieve this coalition as soon as possible, [the alliance of] 34 countries has been announced."
In announcing the coalition, SPA stated that Islam forbids "corruption and destruction in the world" and that terrorism represents "a serious violation of human dignity and rights, especially the right to life and the right to security".
Saudi Arabia is part of the US-led coalition against IS and is also leading a military intervention in Yemen against Shia Houthi rebels.
The list of 34 members: Saudi Arabia, Bahrain, Bangladesh, Benin, Chad, Comoros, Djibouti, Egypt, Gabon, Guinea, Ivory Coast, Jordan, Kuwait, Lebanon, Libya, Malaysia, Maldives, Mali, Morocco, Mauritania, Niger, Nigeria, Pakistan, the Palestinians, Qatar, Senegal, Sierra Leone, Somalia, Sudan, Togo, Tunisia, Turkey, United Arab Emirates and Yemen.
Posted by Unknown at 8:56 AM