Is it fair to punish prisoners with horrible food? 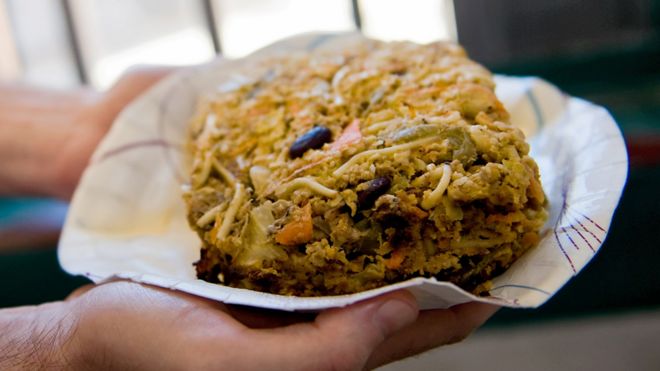 New York prisons are to stop punishing inmates with a type of food known as "nutraloaf" or "the loaf", in a change to the state's solitary confinement policy. But what's in a loaf, and is it ever fair to punish prisoners by downgrading their food?

Nutraloaf. Disciplinary loaf. Prison loaf. Special management meal. The loaf.
The blended and often baked block of food, served in some US prisons as a punishment for bad behaviour, comes in a number of guises.
There is no single recipe.
The New York state prison version that is being discontinued consists of flour, milk, yeast, sugar, salt, margarine, potatoes and carrots.
Los Angeles county jail's loaf contains ground beef, turkey or vegetable protein, cabbage, carrots, potato, tomato juice, flour, onion, red beans, chilli powder and egg, while Pennsylvania state prisons' recipe includes rice and oatmeal.
"They are basically a conglomeration of everything that you'd eat in a day - it can be fruit cocktail, oatmeal, ketchup, tuna, all in the same loaf," says Laurie Maurino, president of the Association of Correctional Food Service Affiliates (ACFSA).
"They are edible, but I think what drives inmates nuts is that they can get the same meal every day for weeks. It's the monotony of it," she says.
The loaves are also frequently made even less appetising by being packaged in a bag.
No-one knows exactly how many institutions use loaves, but Benson Li, the former president of the ACFSA, estimates that it's about 100 out of approximately 4,500 prisons in the US. The Federal Bureau of Prisons says it has never used the loaf in its facilities, so the food is found in either state-run institutions, or municipal and county jails.
"Each state has its own legislature so some prisons offer nutraloaf as disciplinary measures - for example if prisoners disrespect security policy. But in recent years most states are using it less - they see it as less useful, and cruel," he says.
The decision to give an inmate the loaf rather than normal prison food has to be approved by the warden or captain in charge, he says. It is then typically served every day for up to 30 days.
The idea is to make prisoners realise they have something to lose - a decent meal - so the loaf acts as a deterrent, preventing disruptive behaviour.
"Most legislators regulate what's in them to make sure they meet nutritional standards - they normally provide 2,100 to 2,200 calories a day, and are very high in protein. I've tried it, and if it's done right, it tastes like meatloaf," Li says.
However not everyone agrees. The loaf has been described as revolting, "absolutely detestable" and "like chewing on chalk".
It has also been the subject of lawsuits in several states, with prisoners claiming the punitive food is so awful it's unconstitutional.
David Fathi, director of the American Civil Liberties Union National Prison Project believes people should never be deprived of food as a punishment because food is a basic human necessity, but he says nutraloaf is a "constitutional grey zone".
"Some things are clear - prisoners have to be given a diet that is nutritionally adequate - but it can't be so disgusting that no reasonable person would eat it, lose weight and have health problems. Then there would be a valid constitutional challenge," he says.
He cites a 1978 Supreme Court case, when a group of Arkansas prisoners successfully sued over "grue" - an earlier version of nutraloaf which was a blend of meat, potatoes, syrup, vegetables, eggs and margarine, hard-baked in a pan. It was outlawed under the Eighth Amendment, which prohibits cruel and unusual punishment.
"When courts have upheld the use of the loaf it has been when its use has been limited to prisoners who committed misconduct directly related to food - they were throwing food or wouldn't give their meal tray back," he says.
He also argues that interfering in prisoners' diet can make them more disruptive, so it doesn't make managerial sense.
The American Correctional Association, which sets best practices for the industry, discourages using food as a disciplinary measure.
But Heather Ann Thompson, a mass incarceration historian at the University of Michigan, points out that the policy has a long history in the US.
"It has ranged from not caring about the quality of food - it not having a sufficient calorific content, being rotten or badly preserved - to using restricted diets like bread and water in the 19th and early 20th Century.
"It wasn't until the 1960s that the tide started to turn." Nutraloaf however, ran counter to this tide, as it was made "as disgusting and unpalatable as possible," she argues.
New York state is now replacing the loaf with with "a nutritious, calorie-sufficient, and palatable alternative meal composed of regular food items that can be safely delivered to and eaten by inmates," according to the Department of Corrections and Community Supervision website. A packed or "sack" lunch "consisting of fruit, cheese, cold cuts, sandwich bread, and coleslaw would meet the requirements," the website says.
It also says that "special management meals" can only be used when a prisoner in solitary confinement throws food, commits unhygienic acts "such as spitting at staff or other inmates or throwing faeces or urine", or refuses to obey a direct order at a mealtime.
The new sack meal is hardly fine dining, but Fathi says it marks a step in the right direction and is another sign that US prisons are turning their backs on "archaic practices".
Posted by Unknown at 5:06 AM