Apple Pay to launch in China from 2016 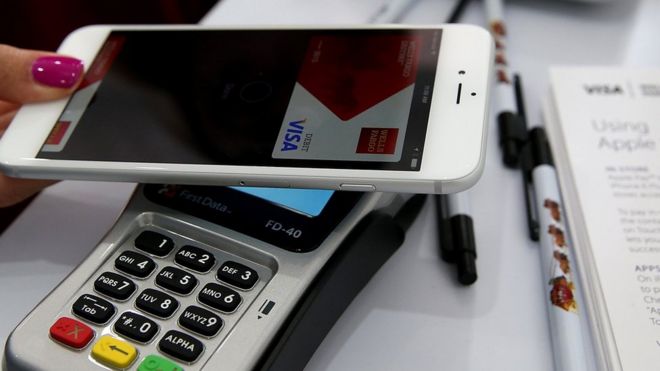 China's state-owned bankcard association, China UnionPay, has joined forces with Apple to bring the US giant's electronic payment system, Apple Pay, to the mainland.
Apple Pay will roll out to China UnionPay cardholders as early as 2016, pending approvals, the firms said.


Shoppers around the world are being encouraged to use smartphones instead of cards to pay for in-store purchases.
Alibaba's Alipay currently dominates China's electronic payments market.
By 2017 it is estimated the global mobile payments market will be worth some $1tn (£650bn).
UnionPay's alliance with Apple is an extension of its plans to make the most of that growing market.
Executive vice president Chai Hongfeng said the firm would provide "secure, convenient mobile payment experiences for its hundreds of millions of cardholders, aligning multiple parties in the industry".
"We're very excited to offer Apple Pay among a diverse set of innovative payment options that work with China UnionPay QuickPass," Mr Chai said.

There has been a rapid take-up of smartphones in China, with an estimated 68% of the population now owning one - and digital wallets are becoming a more popular way to pay for goods and services.
On Thursday, British e-commerce tech firm Powa Technologies said it had formeda joint venture with UnionPay Network Payments which could generate $5bn (£3.3bn) in revenues over three years.
Powa's technology enables shoppers to pay for goods quickly in-store as well as online using their smartphones.
UnionPay Network Payments is owned by China UnionPay.
Pending approval from regulators, China UnionPay cardholders should be able to add their bankcards to Apple Pay on iPhones, iPads and Apple watches, the firms said.
UnionPay cards have been accepted in 150 countries and regions outside of China.
They can be used in more than 26 million merchants and at 1.9 million ATMs. More than five billion UnionPay cards have been issued in China and around the world so far.
The company has its headquarters in Shanghai and was launched in March 2002. Apple's pay facility was launched last year and so far only operates in the US and UK.

In addition to Apple Pay, Google's Android Pay is available at more than one million locations in the US, while Samsung Pay was launched in South Korea in August, followed by a launch in the US the following month.
PayPal also has a system for shoppers to pay for purchases digitally without using a card. It also allows users to send money to people with an email or mobile number.
Earlier this year, Apple extended its mobile wallet service to the UK, making it the first country outside the US to get the facility.
Other mobile wallet schemes include Barclays' Pingit and PayM which are used to send and receive money by using mobile numbers.
Visa's V.Me service allows users to store a range of credit card details securely online to help speed up internet purchases.
Posted by Unknown at 3:53 AM

Email ThisBlogThis!Share to TwitterShare to FacebookShare to Pinterest
Labels: TECHNOLOGY