An 11-year-old boy in the US state of Tennessee has been held on suspicion of shooting dead an eight-year-old girl in a row over a puppy.
The boy has been charged with first-degree murder as a juvenile.
According to police, he shot neighbour McKayla Dyer on Saturday evening after she refused to let him see her puppy.
In another fatal child shooting case, authorities said on Monday that an 11-year-old boy fatally shot his brother while target shooting in Ohio.
The boys were with two adults, who had three loaded guns on a picnic table. The younger boy picked one up and it fired, killing his 12-year-old brother.
An investigation is pending but authorities said the shooting appears to have been accidental.
In Tennessee, the deceased girl's mother Latasha said that the two children went to the same school in White Pine, about 200 miles (315km) east of Nashville.
She said the family had had trouble with the boy when they first moved to the area.
"He was making fun of her, calling her names, just being mean to her. I had to go to the principal about him and he quit for a while and then all of a sudden yesterday he shot her," Ms Dyer told WATE-TV.
"She was a precious little girl. She was mommy's girl. No matter how bad of a mood you were in, she could always make you smile."
"I want her back in my arms," she said.
The Gun Violence Archive, a not-for-profit organisation that compiles data on gun violence in the US, says 559 children aged 11 or under have been killed or injured in the United States in gun violence so far this year.
Read more: US gun violence in numbers
The boy shot the girl from inside his home with his father's 12-gauge shotgun, Jefferson County Sheriff Bud McCoig said.
McKayla was taken to a nearby hospital where she later died.
Neighbour Chastity Arwood told WBIR News that she heard the shot ring out and saw McKayla lying on the grass.
"Trying to comfort her mama and her aunt and her grandma and her grandpa and her sister and her brother was the hardest thing I ever had to do," Ms Arwood said.
The boy, whose identity has not been released due to his status as a juvenile, is scheduled to appear in court again on 28 October.
The shooting took place only two days after a mass shooting at a small town college in Oregon in which nine people were killed. 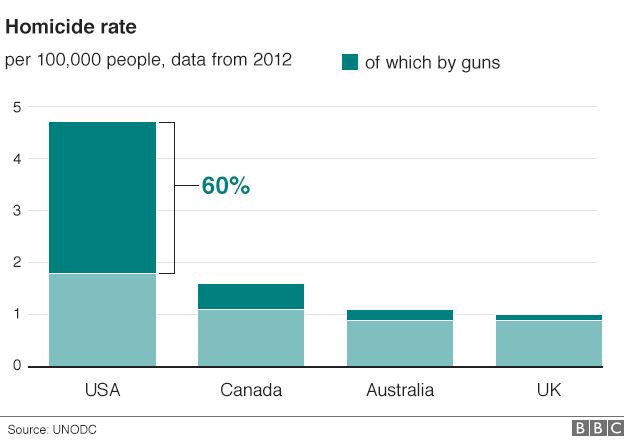