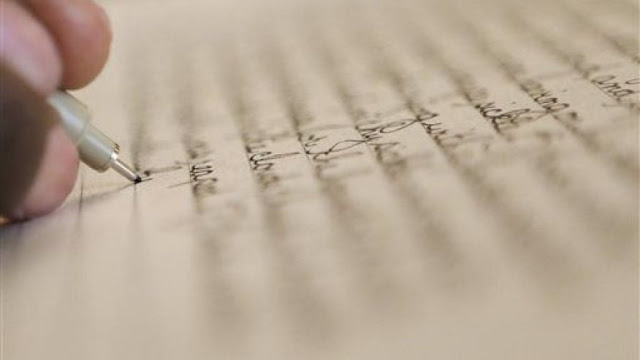 Phillip Patterson transcribes the King James Bible at this home on April 30, 2013, in Philmont, NY. (AP Photo/Mike Groll)
An American professor was searching last year for a letter relating to Samuel Ward, one of the translators of the King James Bible, in the archives of Sidney Sussex College in Cambridge.

"I thought that would be my great discovery," Jeffrey Alan Miller of Montclair State University tells the New York Times. Instead, that honor has ended up going to something else he found: a paperback-sized notebook once belonging to Ward that had been cataloged in the 1980s as including "verse-by-verse biblical commentary." As Miller flipped through it, "there was a kind of thunderstruck, leap-out-of-bathtub moment," he says.
It looked to be an early draft of the King James Bible, containing a book from the often-omitted section, the Apocrypha, and pieces of the Wisdom of Solomon.
King James I commissioned the new Bible translation in 1604, and Miller says the 70-page draft dates from 1604 to 1608. If validated, the find will become the earliest known draft of the King James Bible, one of only four manuscripts of the text ever found, and the only one definitively written by a translator.
It would also offer insights into how the book—which gave us phrases like "fight the good fight" and "the skin of my teeth"—came to be. The Telegraph reports scholars worked to prepare it in teams or "companies" at the University of Oxford, University of Cambridge, and Westminster.
But Miller says Ward's notebook suggests he worked alone, at least in the early stages. "It clearly shows him ... working out the translation for himself as he went along, making mistakes and changing his mind," Miller writes in the Times Literary Supplement, raising the possibility that the Bible "may be far more a patchwork of individual translations ... than has ever been properly recognized." (The oldest known Gospel was just found in a mummy mask.)
This article originally appeared on Newser: American Finds Oldest Draft of King James Bible
Posted by Unknown at 4:39 AM