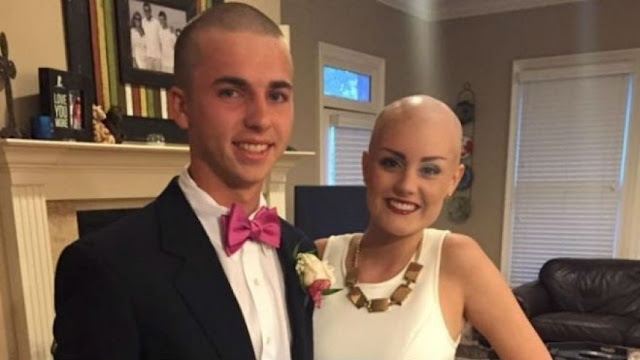 One Houston high school student’s homecoming dance was made even more special by a surprise from her date, who shaved his head in solidarity with her cancer battle.

Allie Allen, a junior at Houston High School in Germantown, Tenn., was diagnosed with anaplastic ependymoma grade 3 in 2013. After surgery and radiation, doctors found no signs of the disease. A few months ago her mother, Debbi, was diagnosed with Stage 3 breast cancer, according to the family’s GoFundMe page. Then, Allie’s cancer returned.
Although Allie is undergoing treatment at St. Jude Children’s Research Hospital, she’s never missed her school’s football games, sitting on the sideline in her pom uniform, according to My Fox Memphis.
On Saturday, Allie attended the school’s homecoming dance with Brayden Carpenter, whom she’s known since sixth grade. When he arrived to pick her up, Carpenter surprised her by unveiling his shaved head to match hers.
Allie was crowned junior homecoming princess.
According to the family's GoFundMe page, Allie shaved her head three weeks ago after much of it had fallen out after treatment.


“One of these pictures shows my scar now everyone can see it, but a scar is a tattoo with a better story, right?” she wrote on the page.
Posted by Unknown at 8:04 AM