Processed meats do cause cancer - WHO 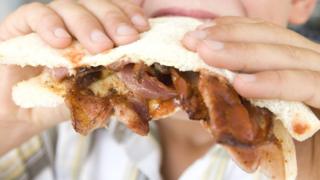 Processed meats - such as bacon, sausages and ham - do cause cancer, according to the World Health Organization (WHO).


Its report said 50g of processed meat a day - less than two slices of bacon - increased the chance of developing colorectal cancer by 18%.
Meanwhile, it said red meats were "probably carcinogenic" but there was limited evidence.
The WHO did stress that meat also had health benefits.
Cancer Research UK said this was a reason to cut down rather than give up red and processed meats.
And added that an occasional bacon sandwich would do little harm.

What is processed meat?

Processed meat has been modified to either extend its shelf life or change the taste and the main methods are smoking, curing, or adding salt or preservatives.
Simply putting beef through a mincer does not mean the resulting mince is "processed" unless it is modified further.
Processed meat includes bacon, sausages, hot dogs, salami, corned beef, beef jerky and ham as well as canned meat and meat-based sauces.
It is the chemicals involved in the processing which could be increasing the risk of cancer. High temperature cooking, such as on a barbeque, can also create carcinogenic chemicals.

The WHO has come to the conclusion on the advice of its International Agency for Research on Cancer, which assesses the best available scientific evidence.
It has now placed processed meat in the same category as plutonium, but also alcohol as they definitely do cause cancer.
However, this does not mean they are equally dangerous. A bacon sandwich is not as bad as smoking.
"For an individual, the risk of developing colorectal (bowel) cancer because of their consumption of processed meat remains small, but this risk increases with the amount of meat consumed," Dr Kurt Straif from the WHO said.
Estimates suggest 34,000 deaths from cancer every year could be down to diets high in processed meat.

21%
of bowel cancers are caused by processed or red meat
86%
of lung cancers are caused by tobacco
Source: Cancer Research UK
PA
That is in contrast to one million deaths from cancer caused by smoking and 600,000 attributed to alcohol each year.
Red meat does have nutritional value too and is a major source of iron, zinc and vitamin B12.
However, the WHO said there was limited evidence that 100g of red meat a day increased the risk of cancer by 17%.
An eight ounce steak is 225g.
The WHO said its findings were important for helping countries give balanced dietary advice.

Prof Tim Key, from the Cancer Research UK and the University of Oxford, said: "This decision doesn't mean you need to stop eating any red and processed meat, but if you eat lots of it you may want to think about cutting down.
"Eating a bacon bap every once in a while isn't going to do much harm - having a healthy diet is all about moderation."
Dr Teresa Norat, one of the advisors to the WHO report and from Imperial College London, said there were many factors causing bowel cancer.
She told BBC News website: "People should limit consumption of red meat and avoid consuming processed meat, but they should also have a diet rich in fibre, from fruit and vegetables and maintain an adequate body weight throughout life and limit the consumption of alcohol and be physically active."
The industry body the Meat Advisory Panel said "avoiding red meat in the diet is not a protective strategy against cancer" and said the focus should be alcohol, smoking and body weight.
Posted by Unknown at 10:33 AM