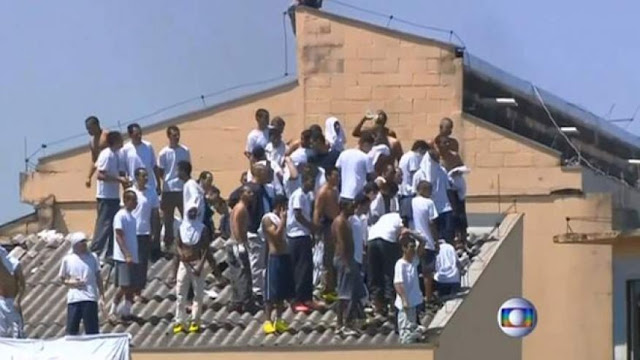 Inmates at the Parana state prison in southern Brazil demand better food and improved living conditions during a riot. (SkyNews)

Prisoners have threatened to throw hostages from the roof of a prison in southern Brazil during a riot.
Inmates at the Parana state prison in Londrina climbed across a rooftop during the riot, dragging several hostages with them.
The hostages, who had their wrists bound, were held over the edge of the roof.
Local news reports quoted police as saying the inmates were holding around five hostages, all of them fellow inmates at the prison.
The inmates are demanding better food and improved conditions, according to the Globo TV network.
Authorities have been negotiating with the rioters in an attempt to bring a peaceful resolution to the crisis.
Human rights activists have frequently accused authorities of maintaining poor conditions in Brazilian jails, with overcrowding a particular problem.
The Parana state prison reportedly holds 1,140 inmates, despite being designed for only 928 people.
Posted by Unknown at 7:15 AM