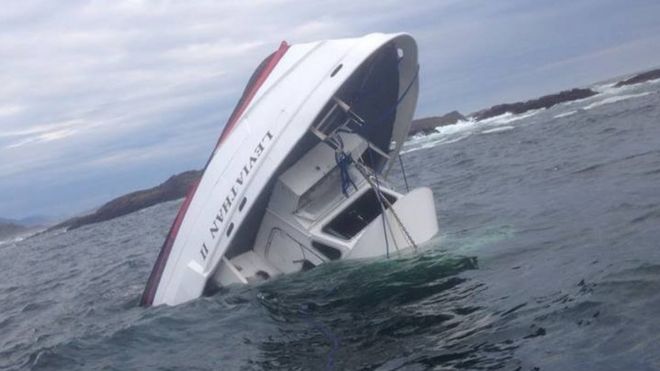 Five Britons were killed when a whale-watching boat sank off the coast of western Canada, the UK Foreign Secretary Philip Hammond has said.


The boat carrying 27 people sank near Tofino, a popular tourist area on Vancouver Island, on Sunday afternoon, killing a woman and four men.
Officials said 21 people had been rescued and one was still missing.
The cause of the accident remains unknown but sea conditions at the time of the incident were said to be calm.
Three of the victims were tourists and two lived in Canada, the coroner in British Columbia said.
The boat, Leviathan II, made a mayday call before sinking about 8 miles (12km) west of Tofino.
Mr Hammond said: "It is with deep sadness that I can confirm five British nationals have lost their lives when the whale watching boat they were on sank off Western Canada on Sunday.
"My thoughts are with the family and friends of all those affected by this terrible accident."
Mr Hammond said consular staff in the region were supporting the family members of those who had died and were in close contact with the Canadian authorities.
Within 30 minutes of the mayday call, a rescue helicopter and boat were on the scene. Other boats in the area also responded to the call for help.
Tofino fishing guide Lance Desilets said at least 12 rescue boats were already out on the water when he arrived on the scene.
"I saw a lot of personal belongings, a long diesel slick and the top 10 feet of the Leviathan II sticking out of the water," he said. "It's a sad day for our community."
Melissa Kai, of the Joint Rescue Co-ordination Center in Victoria, British Columbia said the search-and-rescue efforts had concluded, and the case of the missing person had been turned over to Royal Canadian Mounted Police.

The 20m (65ft) boat was operated by Jamie's Whaling Station and Adventure Centres.
In a statement on the company's website, owner Jamie Bray said: "It has been a tragic day. Our entire team is heartbroken over this incident.
"We are doing everything we can to assist our passengers and staff through this difficult time. We are co-operating with investigators to determine exactly what happened."
Another whale-watching boat operated by the same company capsized in 1998, killing two people, including the boat operator and a tourist from Germany.
The six-metre vessel was on a three-hour trip in the area of Plover Reef when it was hit by a large swell, throwing four people into the water.
Tofino is a popular destination for tourists wanting to spot humpback and Pacific Gray whales, and trips usually last up to three hours.
Canadian Prime Minister-designate Justin Trudeau thanked all those who participated in the rescue effort and offered his condolences to the victims and their families.
"I know firsthand of this coastal area's natural beauty and the many people who visit here from all around the world," said Mr Trudeau, who won Canada's national elections last week.
"My thoughts and prayers are with the passengers, the crew, and their families at this most difficult time. We will continue to offer them support in the days ahead."
Posted by Unknown at 10:37 AM