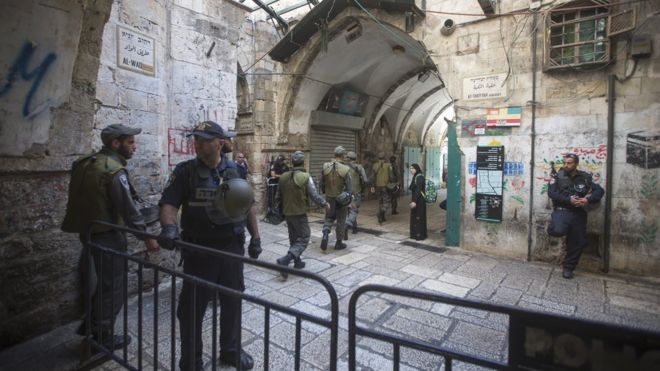 Israel and the Palestinians

Israel is barring some Palestinians from the Old City of Jerusalem after two attacks, one fatal, on Israelis.
The restrictions are for two days and will stop Palestinians from entering the area unless they live there.
It comes after a Palestinian stabbed two Israelis to death on Saturday. Another stabbed and wounded an Israeli teenager. Police killed both attackers.
In clashes later, a Palestinian was shot dead by troops in the West Bank, Palestinian medical sources said.
Hospital officials said he was killed in the town of Tulkarm. The Israeli military said it was looking into the report
Scores of Palestinians were wounded in the violence across the occupied territories, including East Jerusalem, the Palestinian Red Crescent said.
Tensions worsened since an Israeli couple were shot dead by Palestinians in the West Bank on Thursday.
After holding emergency talks with security officials on Sunday, Israeli Prime Minister Benjamin Netanyahu announced a series of new measures, including "fast tracking the razing of terrorists' homes", he said.

The following restrictions will be in place for two days:
Violence has increased recently, with rising tensions over the flashpoint al-Aqsa mosque compound and violent confrontations between Israeli security forces and Palestinian youths, says the BBC's Yolande Knell in Jerusalem.
The mosque is built in a compound in East Jerusalem known to Muslims as the Haram al-Sharif (Noble Sanctuary) and to Jews as Temple Mount. The area is revered by both faiths.
UN Secretary-General Ban Ki-moon has warned of a dangerous escalation in Jerusalem and the West Bank following the attacks.
"Recalling the recent deadly attack on another Israeli family in the occupied West Bank, and in light of the wave of extremism and violence sweeping the region, the secretary-general is deeply concerned that these latest incidents signal a dangerous slide toward escalation," his offices said in a statement.
Mr Ban said he was "deeply troubled" by statements from Palestinian militants, including Hamas, praising such attacks. 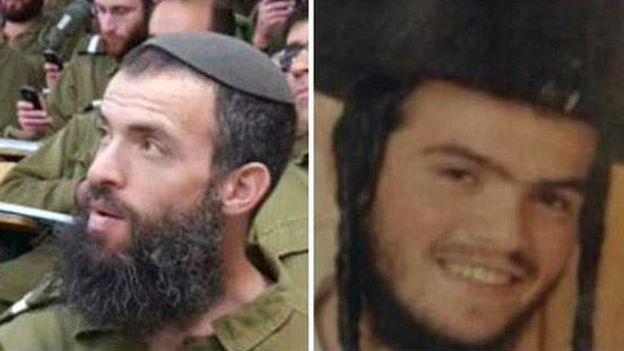 The first stabbing incident took place on Saturday evening in the Old City.
A Palestinian man attacked Aharon Benitah, 21, his wife, their two-year-old son and baby daughter who were on their way to pray at the Western Wall in Jerusalem's Old City, the Israeli foreign ministry said in a statement.
The attacker was named as Mohammad Halabi, a 19-year-old law student from a village near Ramallah in the West Bank.
Rabbi Nehemia Lavi, a reserve officer in the Israel Defense Forces (IDF), was killed as he tried to defend the family, the ministry said.
Mr Benitah's wife was seriously wounded, while their young son suffered minor injuries and their baby was unharmed, it added.​
In the second incident, a Palestinian teenager stabbed an Israeli teenager on a street in West Jerusalem in the early hours of Sunday. The attacker was also shot dead by police.