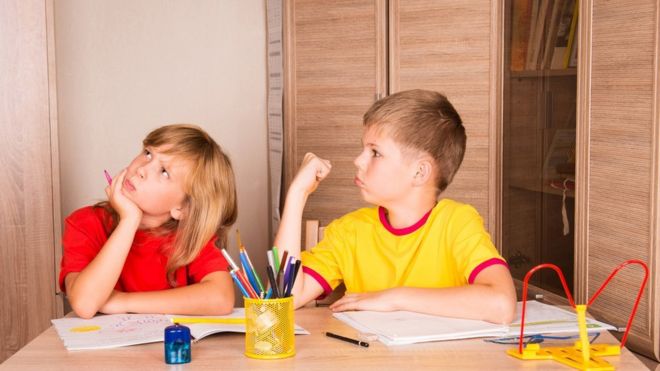 Are you older and wiser than your brother or sister - or younger and more rebellious? There has long been a fascination with how our position amongst siblings affects character traits, but new research has revealed that these stereotypes do not stand up to scrutiny. However, there may be other reasons to be envious of your sibling's birth position.


In a new study from the University of Leipzig, researchers examined how neurotic, extraverted, conscientious, open and agreeable 20,000 people were from the UK, US and Germany - and concluded that personality is not affected by whether you were born first, last or in between.
But science is increasingly showing that your birth order can affect who you are in different ways - older siblings are smarter on average, while the youngest are healthier and more likely to be gay.
Older and smarter
In the Leipzig study a small difference in intelligence was found - firstborns tended to be slightly more intelligent than their younger siblings, who are in turn slightly more intelligent than their younger siblings.
The researchers also discovered there were differences in how intelligent people thought they were, with first-born children being more likely to agree with statements such as "I am quick to understand things" than their younger siblings.
These people were also more likely to say they found it easier to understand abstract ideas and that they had a richer vocabulary than younger siblings.
Although it's not clear why this might be the case, previous research suggests this might be due the eldest child's social status in the family rather than a biological change that happens in the womb.
It is thought that a higher social rank could be responsible for the small increase seen in intelligence .

Another trait that research has shown is related to birth order is how healthy siblings are - younger children in families appear to be healthier than their older brothers and sisters.
A number of studies, including research from Queen's University Belfast, looked at the relationship between birth order and incidence of Type 1 diabetes. They saw that those born second, third or later had a reduced risk of becoming diabetic compared with the first born child.
Experts suggest it could be caused by changes in the womb or from experiences after birth, such as delayed exposure to infections.
Younger siblings are more likely to be exposed a variety of bugs earlier in life as a result of older siblings bringing them home from school.
Researchers speculate that this stimulates the immune system of the younger children and reduces the risk of it incorrectly attacking the body - which would result in autoimmune diseases like type 1 diabetes.

Another trait that research has shown is related to birth order is sexual orientation in men.
Men with more elder brothers are more likely to be gay. This effect is known as the "older brother phenomenon" - for every extra older brother a man has the likelihood that he is attracted to men is increased by a small amount.
Prof Tony Bogaert, of Brock University, Canada, one of the scientists who first observed the phenomenon, explained that this is a biological effect.
'Each older brother actually changes the womb in some way. And we think the most plausible explanation has to do with the maternal immune response.'
Male foetuses produce a particular type of protein in the womb that helps male genitalia to form. But when this is produced, the mother's body responds by producing other proteins, known as antibodies.
This is a natural process and not dangerous to either the mother or the foetus. But it does mean that in subsequent pregnancies these antibodies are more quickly produced if the next foetus is also male.
As a result, having older brothers means that a male foetus could have been more quickly exposed to these antibodies from his mother. Prof Bogaert believes that this immune response explains the older brother phenomenon.

However, this immune response is only one of many factors that influence men's sexuality.
Traits such as intelligence and sexuality are determined by a range of interconnected factors - such as family size, mother's age at birth and genetics - which means that finding a relationship with birth order is extremely difficult. Large studies are needed to find these subtle influences.
The Leipzig study was the second largest that has looked at what effects birth order has - which means the researchers can say your older sibling probably is that tiny bit smarter than you.
Posted by Unknown at 2:45 PM