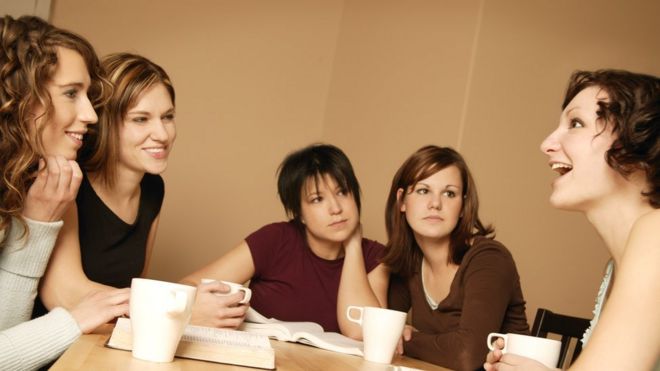 Gay women tend to be exclusively sexually attracted to women, while straight women are more likely to be aroused by both sexes, a study says.
Researchers asked 345 women about their sexual preferences and compared these with their arousal levels when shown videos of attractive men and women.


They found 28% of straight women were mostly aroused by their preferred sex, compared with 68% of gay women.
The University of Essex study concluded that no woman is "totally straight".

The new study, led by Dr Gerulf Rieger from the University of Essex and published in the Journal of Personality and Social Psychology, measured the arousal of women using eye tracking devices and direct measures of physiological sexual response.
Previous studies had already suggested that straight women were aroused by both sexes when tested, but researchers had never looked at whether the same was true for gay women.
Dr Rieger said the study's conclusion that women who identified as being completely gay were much more aroused by their preferred sex was "amazing".
He said their sexual arousal patterns were much more similar to men, whose responses tend to very accurately mirror their stated sexual preferences.
Dr Rieger said: "In the past we thought it was true of all women that they were aroused by both sexes. The fact that it appears this is not the case is amazing."

Dr Rieger said it was not known why gay women were more often only aroused by their preferred sex, but he believes it may be to do with the amount of testosterone female babies receive in the womb.
It was possible, he said, that women who experienced testosterone early in pregnancy had sexual behaviours that were more similar to men, but this has not yet been proven.
He said tests showed similar behaviours occurring in monkeys.
Dr Rieger said the wider conclusions of the study was that, while the majority of women identified as straight: "Our research shows that, when it comes to what turns them on they are usually bisexual or gay, but never totally straight".
However, he added the research did not necessarily mean women were repressing their true sexual preferences, but that their sexualities were simply more complex than men's.
"When it comes to straight women and sexual arousal there is such a disconnect between what a woman tells me and what her body does.
"It suggests that it's a different world for women when it comes to their sexualities."
Posted by Unknown at 7:53 AM