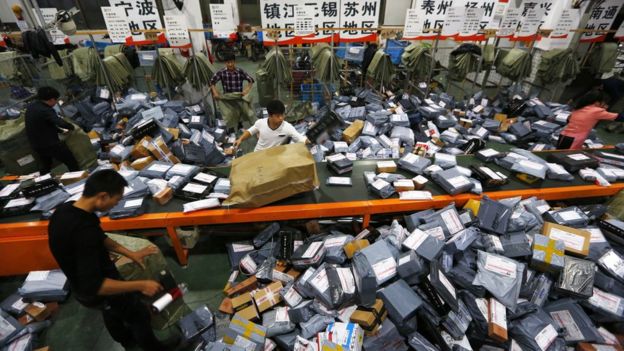 E-commerce giant Alibaba has broken its own record for sales on China's Singles Day, the world's biggest online shopping event.
The firm said sales surpassed the record amount of $9.3bn (£6.1bn) made last year in just over half the time.

Singles Day, also known as Double Eleven because it is held on 11 November, has become a major annual event for Chinese retailers.
Alibaba said more than $1bn was spent within eight minutes of midnight.
Within the first hour, it had made $3.9bn (£2.bn) in sales, almost double the amount spent in the same time period of the event last year.
In comparison, sales on Cyber Monday, which is the biggest online shopping day in the US, hit $1.35bn, according to data analytics firm ComScore.
James Bond, bragging and 'eating dirt' - China celebrates Singles Day
Analysis: Celia Hatton, BBC News, Beijing
The reaction to China's Singles Day shopping bonanza reflects the drama and excitement of China's capitalist holiday.
"I wanted two different coats, but they both sold out in the first three minutes of the sale!", complained one young woman online.
"I spent 2,000RMB last night ($315; £207)" exclaimed another. "Now I'm going to have to eat dirt if I'm hungry because I'm broke!"
But don't mistake the rush to spend as a sign the Chinese economy is turning around.
Many shoppers are well aware the economy is slowing. It is common for people to wait to spend on Singles Day to save money.
New data supports nagging concerns about the economy. Inflation is down: non-food prices dropped 0.3% in October, indicating that consumption continues to fall in China - a long-term trend that Singles Day won't fix.
Why China's big brands are cashing in on singles

Singles Day has grown tremendously since Alibaba began promoting it as a shopping day in 2009, and now includes many retailers such as rivals JD.com that stage sales promotions.
This year, Alibaba said there would be more than 40,000 merchants and 30,000 brands from 25 countries selling goods on its platforms.
More than 130 million users have already visited its marketplace app, Taobao, which exceeds the peak from last year.
In the lead up to the event, the firm hosted a four-hour TV variety show featuring Chinese celebrities and Western entertainers such as British actor Daniel Craig of James Bond fame.
American actor Kevin Spacey appeared as his character President Frank Underwood from the Netflix series House of Cards to wish shoppers a "happy Singles' Day" in a two minute video.
Alibaba chief Executive Daniel Zhang had said in a statement that the event would mean "the whole world will witness the power of Chinese consumption".
He promised consumers "a new surprise every hour" over the 24-hour marathon, especially mobile users.
The firm said more than 27 million purchases came via mobile devices in the first hour.
Although its competitors offered attractive discounts, Fangting Sun, China-based analyst at market research firm Euromonitor International said that consumers' attention was still focused on Alibaba's online marketplace Tmall.com.
"[It's] not only due to the wide choices and competitive prices, but also the heavy marketing campaigns especially the successful gala evening which invited lots of famous entertainment stars," she said.
Kitty Fok, China manager for market research firm IDC said online shopping had become a comfortable channel for most consumers.
"China is a big market with close to one billion smart connected device users - it is a good news for both Alibaba and their competitors," she said.

Alibaba accounts for more than 80% of China's internet sales market.
It predicts that 1.7 million couriers, 400,000 vehicles and 200 planes will be making deliveries of products that range from electronics goods to cosmetics despite slowing growth in China.
Economists will be looking for clues about domestic consumption in Wednesday's sales as the world's second-biggest economy heads for its slowest growth in nearly a quarter of a century.
Ms Sun of Euromonitor said the shopping event would not only stimulate domestic demand but also trade.
"Alibaba aims to both attract more international players selling products to China and the domestic players to expand to the overseas markets," she added.