Blackberry Priv: The final phone in the coffin? 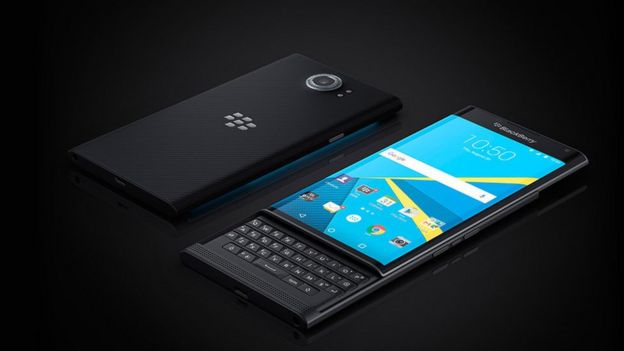 We all know the Blackberry story.
Well before Apple's iPhone, Blackberry kicked off the smartphone revolution and brought the office out of the office and into the tap-tap-tap grasp of workers all over the world.
Ease of use and security made Blackberry handsets the choice for corporations everywhere - not to mention world leaders.


But the Blackberry went pear-shaped. Unable to keep up in a market of sophisticated phones, with vast app stores and big screens, Blackberry was soon seen as a boring business phone.
The firm, once known as Research in Motion, has had one glimmer of hope in recent times: Blackberry Messenger was unexpectedly popular with teenagers, but even BBM - as it was referred to - eventually lost out to Whatsapp and Snapchat as a the teen tool of choice.
Blackberry sales now account for less than 1% of the global smartphone market.
On Friday, Blackberry launches a new phone, which it is calling Priv by Blackberry.

It's a cliché to regard any new Blackberry launch these days as the "last throw of the dice". It's also unfair - it isn't.
Blackberry is sitting on $3bn of cash, and so there's room to keep trying for a while yet.
The Priv is an (other) attempt by Blackberry to hit some kind of great middle ground: A phone so secure it is trusted by company IT bosses, but pleasurable and simple enough so that normal people - ie the workers - want to use it.
Here's how it hopes to woo companies:
And to keep users happy:

By Blackberry's own admission, its handsets are performing terribly. So much so that current chief executive John Chen said he'd pull out of the device market if things didn't pick up soon.
But the Blackberry aesthetic has attracted some fans.
The unorthodox Blackberry Passport, which is square, was laughed at by many techies but impressed in the fashion community, picking up various design awards along the way.
By being aligned with corporate success, Blackberry devices can be a status symbol, like a sharp suit. It says "you must be doing something very important if you're using a Blackberry to do it".
Furthermore, as the Priv is an Android device, it means all the popular apps will be available - unlike previous Blackberrys which didn't support the likes of Uber and Instagram (although there were some attempts to emulate Android apps).
As for the downsides, while the rear camera is well-specced, the front-facing camera is a less impressive at 2 megapixels. Not great for selfies, naturally, but also bad for video conferencing over Skype, among others - so perhaps a turn-off for business customers.
At a cost of $700 for a sim-free handset (or £579.99 in the UK) - the new handset is in line with the iPhone and top-end Android devices.
Though a more aggressively priced device might have been what made people jump ship at their next upgrade.

What if it flops?

According to Forbes, less than 10% of Blackberry's value is from flogging handsets, and so the company can remain pretty calm if the Priv doesn't do well because the firm's security software side will prop it up - for now.
Mr Chen has said he wants to sell five million Privs in a year. That's compared with Apple which sold 48 million iPhones in its last quarter.
While Blackberry is not being too ambitious compared with Apple and Samsung, five million in one year would be a big improvement.
In its last quarter, Blackberry managed just 800,000 device sales.
If the Priv doesn't impress consumers and business people, it could well be Blackberry's last ever handset.
The company will survive, but it will always wonder what might have been had it kept up with the rapid mobile world.
Posted by Unknown at 9:21 AM