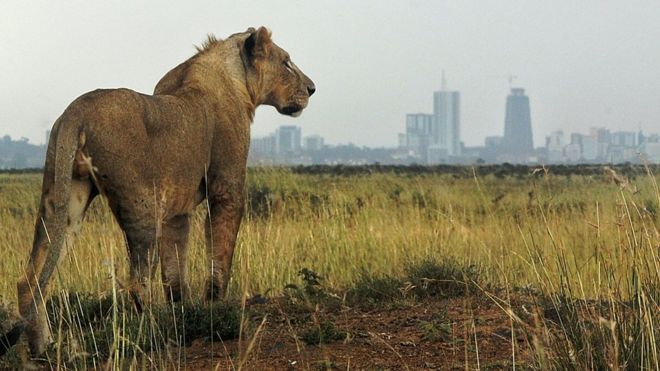 The Kenya Wildlife Service (KWS) is hunting for at least four lions which have escaped from Nairobi National Park bordering the capital, Nairobi.
They escaped not long after midnight and were spotted on main roads in the city by morning.


Nairobi residents have been urged to stay away and report any further sightings to a free telephone line.
"Lions are dangerous wild animals. Don't confront them when you encounter them," KWS's Paul Udoto tweeted.
The BBC's Abdinoor Aden in Nairobi says the park is separated by a main road from densely populated neighbourhoods in the south of the city.

Wardens at the park told the BBC that helicopters are now being used to track and trace the escapees, thought to include three lions and a lioness.
There has been confusion about exactly how many lions are on the loose with Mr Udoto, KSW's spokesman, saying reports of six lions were exaggerated.
Mr Udoto said he was concerned that people would try and tackle the lions themselves, as has happened in the past.
In 2012, four cubs had to be placed in an orphanage after a similar incident led to their mother being killed.
Answering a question on Twitter from a worried mother, Mr Udoto advised her to keep her children locked inside until the lions had been safely returned to the park, adding such incidents were the "perils of born town lions".
It is estimated about 30 lions live in the park.