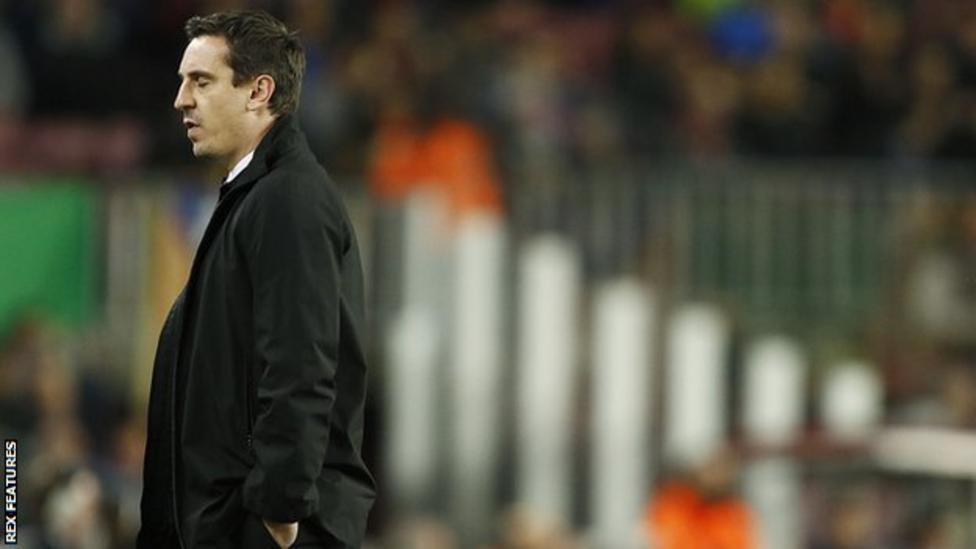 Gary Neville should have apologised and resigned as Valencia coach after their humiliating Copa del Rey defeat, says former goalkeeper Santiago Canizares.
Valencia were thrashed 7-0 by Barcelona in a semi-final first leg on Wednesday.
Former Manchester United captain Neville described the loss as "one of his worst experiences" in football.


Canizares said: "I expected the coach's resignation, as well as some apologies. I may be ignorant, but I'm surprised he hasn't. I thought he was honest."
'One of the worst results in our history'
Neville is yet to win in the eight La Liga games he has been in charge, after being appointed as boss in December.
Soon after the match, #Nevilleveteya, which translates to Neville go now, was trending in Valencia on Twitter but sporting director Jesus Garcia Pitarch said it was "not the day to talk about the future".
He added: "This day you can't explain. We must apologise to fans for one of the worst results in our history."
Canizares, who played over 400 times for the club, winning two league titles and two cups, questioned the decision-making at the club.
"If Garcia Pitarch trusts in Gary as he said on Monday, I'm disappointed. If it's not like that, why did he say that?" he said.
"If (Garcia Pitarch) lied to us, and tomorrow he proposes the sacking of the coach and it's not accepted, it's best if (Garcia Pitarch) leaves as well.
"Worse than the loss, is giving up in the fight. We are facing a test of fire. To demand decisions is responsible, to give up isn't."
Posted by Unknown at 4:19 AM

Email ThisBlogThis!Share to TwitterShare to FacebookShare to Pinterest
Labels: SPORTS